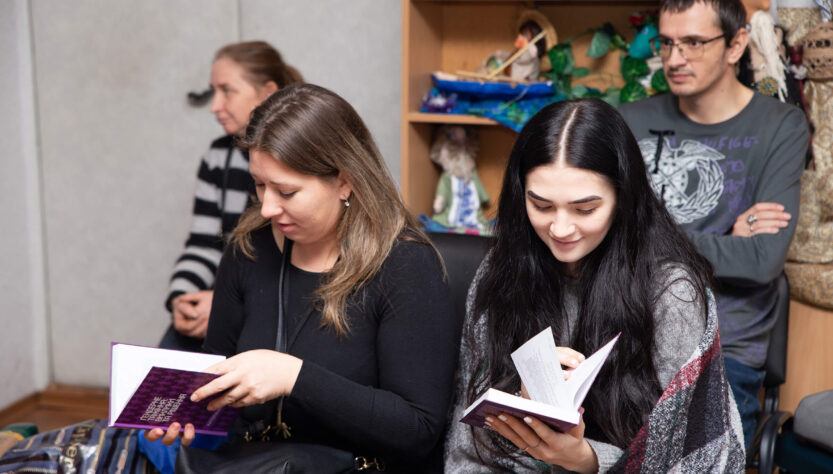 The meeting of participants of Women’s Club «Beregynia» was held in the library named after Natalis Zabily at the end of January.

Kateryna Levchenko, a Government Commissioner for Gender Policy, was present at this meeting . We discussed gender policy, gender issues and ways how to solve them.

The following questions were also raised: employment, self-employment of persons with disabilities, issues of mothers who bring up children with disabilities, women who are in difficult life circumstances. SWOT analysis of peculiarities of employment for these categories was prepared that showed strengths, weaknesses, threats and opportunities regarding employment of women of these categories. All participants have received a gift from Kateryna Levchenko: her authorial books «Gender attraction. Foreword» for all club members.

“It was important for all of us! How inspiring are these meetings! ”- says Natalia, a mother of children with disabilities.

«The girls were reading whole quotes from the book, shared the impression, rejoiced that they were present at Club meetings — many women have never had the opportunity to touch on anything else except their own families and their own problems.» Participants say: «Yes, there are problems that unite us and thanks God that there are not only problems that unite us — we deserve to develop, get education, be equal…!»

They have also considered an opportunity to create an English club to increase women’s competitiveness in the labor market.

The meeting was held within the framework of the work of Women’s Club «Beregynia» with the support of the project funded by the International Women’s Club in Kyiv and implemented by LRPYO «AYD-EAST».

Information support is provided by the National Assembly of People with Disabilities of Ukraine.

We would like to thank the Central Bank of Holosiivskyi district of Kyiv and our partners — Central Regional Library named after M.O. Nekrasov and the library for children named after Natalia Zabily.