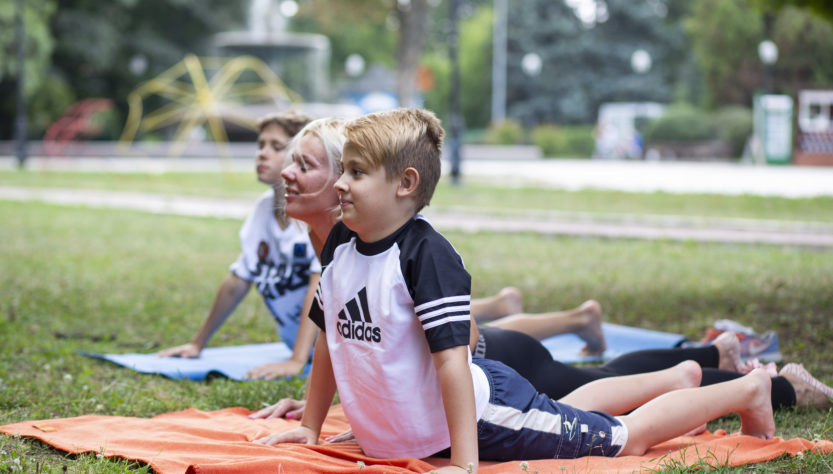 In August, fascinating master classes in health-promoting technologies (YOGA) were conducted for women and girls with health problems, IDPs, women who bring up children with disabilities and live in Kiev.

The events were held as part of Women’s Club «BEREGYNIA» (this Club is supported by International Women’s Club of Kyiv and organized by LRPYO “AYD – East”).

Serhii Shvidunov is very positive and talented person. He is fond of Eastern medicine, science and music. Despite his severe vision problems (disability group 2), in 2011 he graduated from the Rehabilitation Department of Luhansk National University named after Taras Shevchenko. Until 2014, he worked at the Department of the Center of Adaptation for students with special educational needs.

The master class was held in a picturesque park Holosiivskyi, in nature.

«It was a true miracle and we got much positive! We learned much how to keep our health, do important exercises for spine, joints and muscles … we practiced yoga, breathed fresh air, we were filled with joy due to communication! Thanks a lot for such wonderful activities for women! Women’s Club «BEREGYNIA» is a super idea! We want to express our special gratitude to Serhii, our master, and all organizers!» – says Olena, a mother of children with health problems (Luhansk – Kyiv).

Central Library named after Nekrasov N.A. is a Social Partner of the Project in Kiev.

Youth and Sports Department of Luhansk Regional State Administration, Public Institution «Luhansk Regional Center of Social and Cultural Adaptation of Young People with Disabilities» are Social Partners of the Project that support people with disabilities and families of IDPs who live in Kiev.

The National Assembly of People with Disabilities of Ukraine provides methodical and information support of the Project.